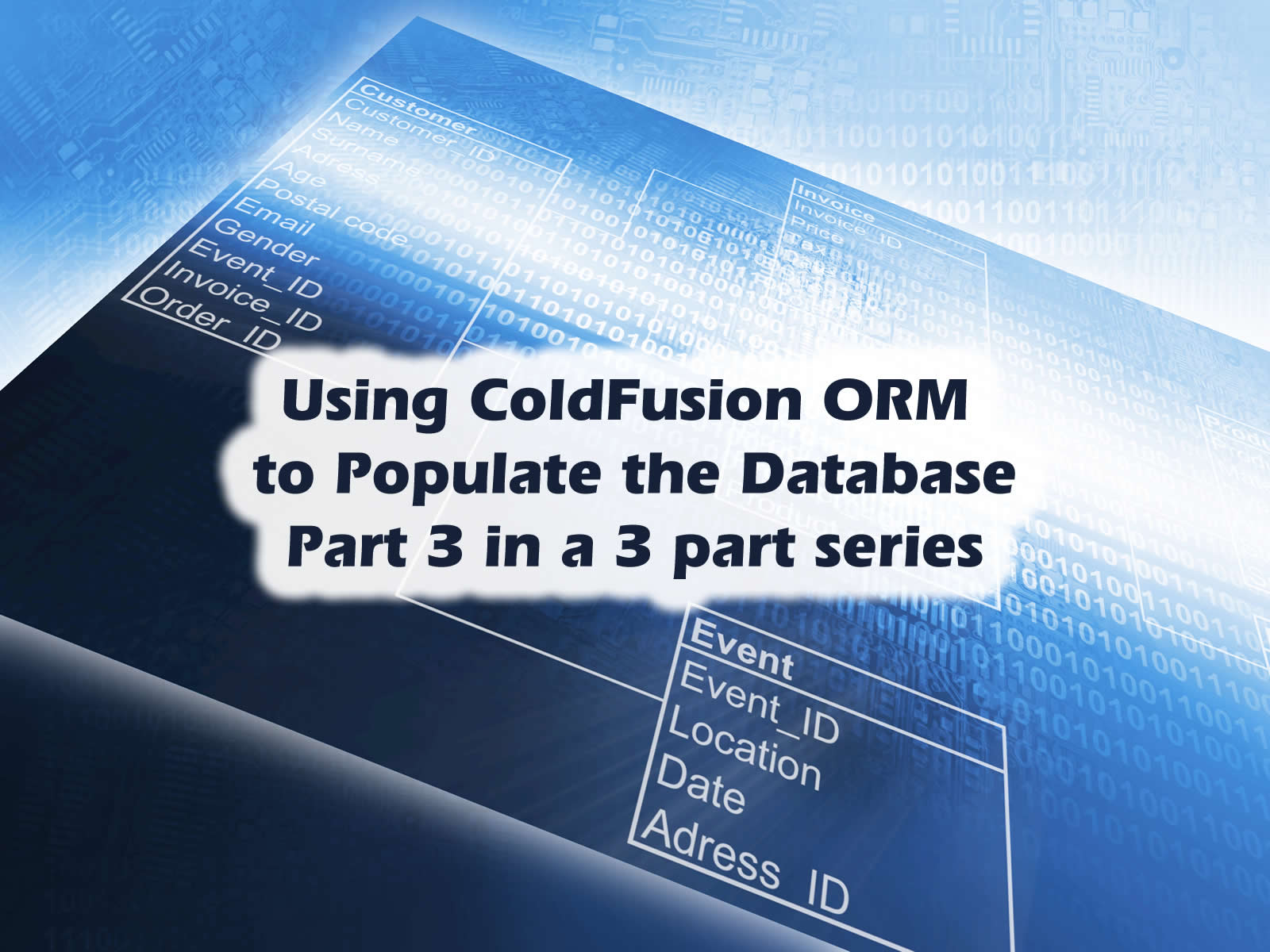 We will be using simple 'SELECT *' database queries on the original BlogCfc tables and populate the new tables that CF-ORM created for us. Populating the database is where the rubber hits the road, if you made any errors in your ORM mappings, all of the flaws will be exposed. I'll try to show you some of the major issues that I faced, and how to resolve them.

Before we go any further on this topic, we must go over a few key concepts

In order to populate the new tables that were created with our persistent CFC mappings, we are going to use the EntityNew and EntityLoad objects along with these objects get and set methods.

In other words, we will use EntityNew to insert known or static values into the database, or use EntityLoad to get the values already in the database, and pass the loaded object back to the object that we created using EntityNew

We will cover each example in depth below.

The code below is an example of populating the data from one table to another. The steps that we will use are:

2) Inserting records into a table that contains a relationship

We can load an object using EntityLoad several different ways:

A) Load a CF-ORM object using the primary key

BlogRefObj is the variable that we are storing the object in. We are loading the Blog table. The numeric value, which is 1, is the value of its primary key. You can also use dynamic values, such as [currentRow] when looping through a recordset.

B) Load a CF-ORM object using filters, similar to the WHERE clause in a query

Here, we are loading the Users table. UserName is the name of the column that we are querying, and "gregory" is the value that we are searching for. Notice the "true" argument at the tail end of this code. This argument allows us to load a single record, which is necessary when we pass back the object to the EntityNew's set method.

Unless you're perfect, you will likely encounter problems once you try to populate your new tables. I will share a few solutions to common problems.

If you have columns that may have null values that contain relationships, you need to use the missingrowignored="true" argument

For example, in my Comment table, I need to have either a known blog user or a commenter, attached to a comment record. A blog user is typically the administrator or super-user of the blog, and a commenter is a user that is a general user making a comment. The Blog user is able to have more functionality, and can perform actions on a comment; whereas the blog commenter has limited functionality and can just make a comment. My Comment table needs one of these references to be defined but does not require both- unless of course, the blog user is also the commenter. These two columns need to accept a null value.

To allow this, I am using the missingrowignored="true" argument.

This error message can manifest itself in many ways. The last part of the message String will be whatever datatype you passed to the set method. For example, it can be coldfusion orm java.lang.Int if you passed in an int, etc.

Script to delete records and set the primary key back to a 1:

Remove all relationships from the database. This is helpful if you just want to delete everything and start over again.

This particular error drove me crazy. I was receiving this constraint error for hours, and no matter what I did- I could not make it go away. I could not find the problematic relationship and deleted all of the constraints in the database, yet this error would not go away.

However, I did not delete the records that were in the database. What happened here was that CF-ORM was trying to create a new constraint based upon the recent changes that I applied to the persistent CFCs. Since there were records in the database that did not meet the new referential integrity, an error was raised. The database was enforcing referential integrity and could not create the constraint as it would result in orphaned records. CF-ORM could not create the new constraint and reported the error.

The solution to this problem is to delete the existing records from the table and to start over.

I highly recommend getting the ColdFusion ORM book written by John Whish. Although it was written for ColdFusion 9, the materials are still relevant and it is the most in-depth CF-ORM resource that I have found.

The cfml.slack.com page also has an active ORM channel with a lot of ORM experts. If you need a solution that we have not covered, try to pose the question there. Of course, you're always welcome to make a comment here if you're in need of help!